The squash study was established on white plastic mulch. Pesticides used on all plots were chemicals labeled for that crop, 2019 North Carolina Agricultural Chemicals Manual. 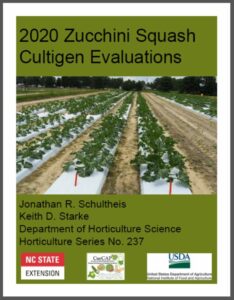 View or print a PDF copy of this document

We gratefully acknowledge the assistance of Cathy Herring, (Superintendent), and Charles Barrow, (Horticulture Supervisor, Central Crops Research Station, Clayton, NC), as well as, the personnel at the research station for their help in establishing, maintaining, and harvesting the squash cultivar evaluation study. We want to acknowledge the following summer employees for their assistance with the study: Benjamin Indermaur, Tanner Seay, Daria Slack, as well as, graduate student; Alyssa Woodard. We would also like to thank Joy Smith for conducting the statistical analysis on the data that were collected in this study. The cooperation and support from Bejo, Enza Zaden, HM Clause, Rijk Zwaan, Sakata, Seedway, Seminis, Syngenta and VoloAgri are also appreciated. This research was also supported by a grant from USDA National Institute of Food and Agriculture Specialty Crop Research for the CucCAP Specialty Crop Research Initiative grant under award number 2015-51181-24285.

This publication presents data from the cultivar evaluation study conducted during 2020. Information in this report is believed to be reliable but should not be relied upon as a sole source of information. Limited accompanying detail is included but excludes some pertinent information, which may aid interpretation. 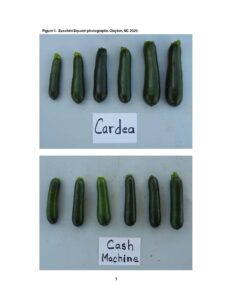 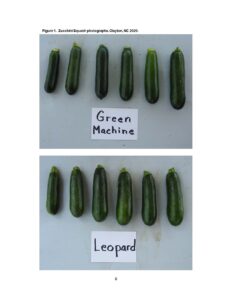 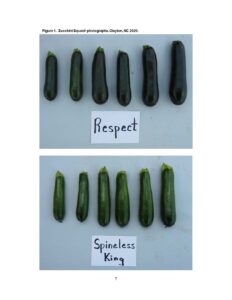 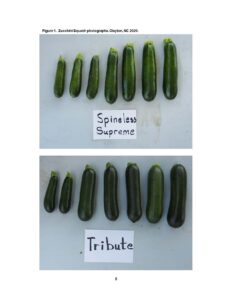 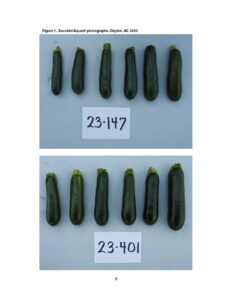 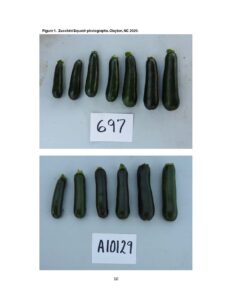 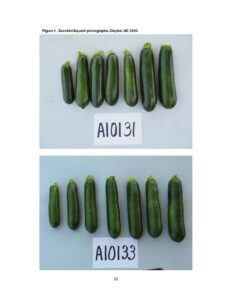 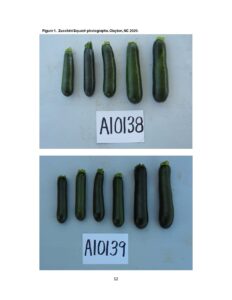 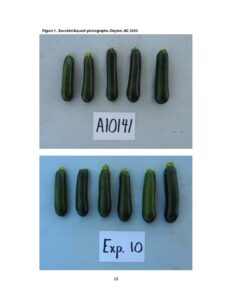 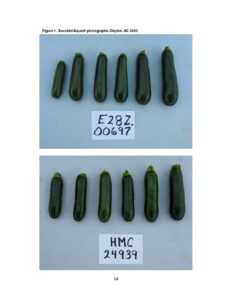 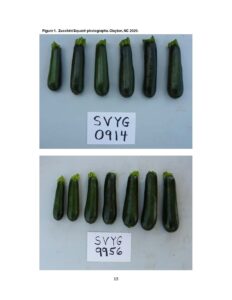 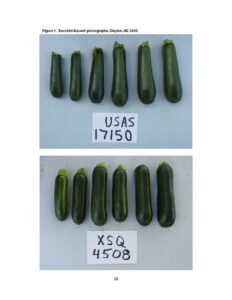 Summer squash production in North Carolina totaled 4,600 acres in 2019 according to the most recent agricultural data. This was an increase of 800 acres from 2018 when summer squash production was reported to be 3,800 acres. More impressive was the $20.3 million dollar crop value of the 2019 squash crop, which surpassed the previous years’ crop by more than $2 million dollars (View the data from the 2019 State of NC Agriculture Overview). Summer squash ranks among the top 10 vegetables grown in North Carolina with Cleveland County (south central North Carolina) producing the greatest acreage of squash in the state. Moreover, summer squash remains an important crop to North Carolina producers as the state is ranked 5th among those states that produced the crop nationwide in 2019 (View data from the USDA Economic Research Service). North Carolina growers have maintained their competitiveness through producing squash cultivars that are highly desired by the consumer. In an effort to remain competitive in the marketplace and maximize profitability most growers seek to grow squash cultivars that will provide them with the highest yields and greatest overall fruit quality. The zucchini market in North Carolina has typically been supplied with a fruit that is medium green in color; however, some markets have seen increased demand for cultivars that produce a darker green fruit. Summer squash plantings in North Carolina typically experience higher incidence of disease and insect pressure since they are harvested in the fall when environmental factors favor increased presence of these plant pests and pathogens. In 2020 the field study was planted on 2 June and we began harvesting on 8 July. The squash were rated for marketable and nonmarketable yields, for early and late production, and for consistency of production throughout the harvest period. Quality measurements were collected and average plant stand counts were determined to conduct the most complete evaluation of each cultivar in the field study. We again included the number of fruit produced per plant over various harvest intervals, and for the entire production season to compliment the yield data. 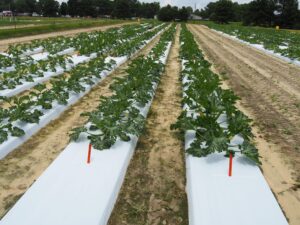 Seeds were sown on 2 June 2020. Hills with seed skips were replanted 10 days after planting to maximize plant stand counts in each plot. Final stand counts were determined on 19 June (17 days after initial planting). The study area was treated with Telone C-17 (10 gal/ac) on 21 November 2019. A broadcast application of 12-6-24 pre-plant fertilizer (400 lb/ac) was made across the entire study area on 20 March 2020. White plastic mulch (1.25 mil thick high density film, 48 inches wide; B.B. Hobbs, Clinton, NC) and drip irrigation tape (NETAFIM, 12 inch spacing, 0.24 gal/min.; NETAFIM, Tel Aviv, Israel) was laid out in the field on 20 March 2020. The herbicides Gramoxone (3 qts/ac), Roundup (1 qt/ac) and Prefar (5 qts/ac) were applied as a on a rotational basis beginning 7 May and on the following dates: 3 and 30 June; 1 and 30 July 2020. The insecticides Assail and FanFare, were applied on a rotational basis as a preventative measure beginning 10 June and on the following dates: 18 and 25 June; 8, 16, 22, and 29 July; 6 August 2020. The following fungicide products were applied as a preventive measure and on a rotational basis throughout the entire growing season: Pristine, Procure, Ranman, and Vivando.

The first fungicide application was made on 18 June; and on the following dates: 25 June; 1, 8, 16, and 22 July 2020. Liquid fertilizer (4-0-8) was applied through drip irrigation beginning 24 June and on the following dates: 1, 8, 15, 22, 29 July; 3 and 12 August 2020. A total of 55.5 gallons of 4-0-8 liquid fertilizer was applied throughout the season. Harvests were conducted three times per week. The first harvest was 8 July and the final harvest (#12) was completed on 3 August 2020. The study was maintained with fertilizer applications until 12 August meanwhile fungicide treatments were discontinued on 6 August in order to facilitate powdery mildew to develop. Two ratings to assess susceptibility to powdery mildew were taken on 14 and 20 August 2020.

Most fruit were harvested when the blossom was detached from the fruit, and then categorized as marketable or non-marketable. Typically, marketable fruit would be graded into number one ‘fancy fruit’, while fruit that were slightly off in shape or color but still very marketable would be graded as number two fruit. Fruit that were small or apparently not pollenated, or were misshapen, were categorized as culls (non-marketable). Graded fruit were weighed and counted for each category and plot. The study design was a randomized complete block with four replications. In addition to yield, other quality measurements taken were: percent plant stand and average fruit length and width, plant architecture, fruit color, and spine ratings of the plant.

Plant stands were excellent with no cultigens averaging less than 95%. Data for fruit length and width were collected from four separate harvests (Table 11). Length and width of five marketable fruit per plot were taken in order to obtain an average length/width ratio for marketable fruit. In this study, cultigens that produced the longest fruit were A10138, Tribute, and A10131. In addition, all plots in the study were rated for the following characteristics: plant architecture (open or closed stalk positioning/density), plant vigor, fruit color, presence or absence of spines and powdery mildew resistance (Table 12). Cultigens with a dense architecture included Cash Machine and Spineless King, while cultigens with more openness were XSQ4508 and A10131 (Table 12). Cultigens with few or no spines were Spineless King, Spineless Supreme, and USAS 17150. The most vigorous vine growth was recorded on Cardea, while the cultigen with the least vigorous vines was HMC 24939 (Table 12). The cultigens with the lowest average incidence of powdery mildew were A10131, Bejo Experimental 10, A10139 and A10141 (Table 12). 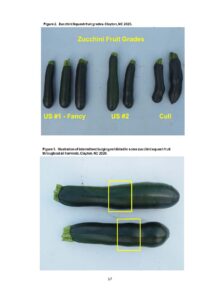 Figure 2 (top) Zucchini Squash Fruit Grades: US #1 – fancy, US #2, and Cull
Figure 3 (bottom) Illustration of intermittent bulging exhibited in some zucchini squash fruit throughout all harvests.

Overall, yields and fruit quality in this study were below average. Fruit grades diminished throughout the study with number two fruit and culls increasing as the season progressed. This study was planted nearly five weeks later than usual due to the COVID-19 pandemic. Exceptionally high heat indexes throughout the growing season may have had a negative impact on the study. We observed predominantly male flowers on the squash plants throughout July, which may have negatively impacted plant fruit set potential and the shape of set fruit. This could explain the low yield that occurred in the study. We have observed much higher yields in past years when plantings were made earlier in the season insert linkS uash booklet on CuCap webpage for 2018 and 2019 . Despite the later plant date neither insect pests nor disease pressure was an issue throughout the season.

Table 4. Zucchini Squash cultigen study yields¹. Percentage marketable US 1 and US 2 grade fruits and culls, and fruit per indicated harvests by number of 20 lb boxes for replicated treatments. Clayton, NC, 2020.