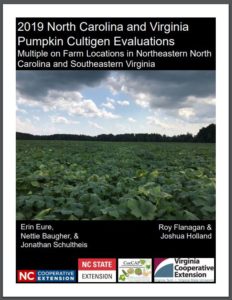 Download a pdf version of this report to print or view.

We gratefully acknowledge the cooperation and assistance of Fred Smith, A.J. Smith & Sons, Edenton, NC, Chris Drake, Sandy Point Farms, Newsoms, VA, and Mike Cullipher, Cullipher Farms, Virginia Beach, VA in helping establish and maintain the pumpkin cultigen study. Additionally we would like to thank Paul Smith, Matthew Leary, Sue Colucci and Jonathan Wilks for their assistance in planting, harvesting, and evaluating the study. We would also like to acknowledge the following seed companies for their cooperation and support: HM Clause Seed Company; Hybrid; Johnny’s Seeds; Rupp Seeds, Inc.; Sakata Seed Company; Syngenta. We also want to acknowledge, support for this study was provided by the US Department of Agriculture, National Institute of Food and Agriculture, for the CucCAP Specialty Crop Research Initiative grant under award number 2015-51181-24285.

This publication presents data from the cultigen study conducted during 2019. Information contained in this report is believed to be reliable but should not be relied upon as a sole source of information. Limited accompanying detail is included but excludes some pertinent information, which may aid interpretation.

In 2018, North Carolina ranked 4th in pumpkin production in the US, with an estimated 4,500 acres grown in the state. The economic value of the pumpkin crop in North Carolina was reported to be more than 15 million dollars in 2016. In Virginia, pumpkins are one of the top 20 commodities and are grown on over 2,000 acres, accounting for over 11 million dollars in gross receipts. The crop carries a significant value to producers in both states, and it appears production of this commodity is increasing in both North Carolina and Virginia. In the western part of NC, pumpkin production is extensive due to the favorable climate of the region, and likely represents 60% or more of the total acreage in the state. For more than a decade, North Carolina State University has partnered with the University of Tennessee on collaborative pumpkin cultigen evaluation studies in these mountain regions. Virginia Tech conducted similar studies in past years, including study locations in the west and eastern part of Virginia, as well as a location in eastern North Carolina. The eastern region studies have not been conducted since 2017, and with pumpkin acreage continuing to rise in this region, this study sought to build off of that data and continue to look at how current and new cultigens perform in the hotter, more humid climate of southeastern VA and northeastern NC. Due to the difference in climate, eastern growers must approach pumpkin production slightly different than western growers. Cultivars that yield well with high quality in the west may not respond the same in the east. Due to the climatic differences, eastern growers seek cultivars with higher heat tolerance and disease resistance. The focus of this study was to evaluate current and new pumpkin cultigens in the 30 to 40 count bin size class (15-20 lbs.) as this is currently where demand is highest. A few recently released smaller cultivars (10-15 lbs.) were also included in the study due to their high yields, uniform fruits, and high quality (i.e. attractive orange color, strong stem handle) in the 2018 western region study. The cultigens in this study were mainly evaluated for yield and size. However, each entry was also rated for shape, color, suturing, handle characteristics, and fruit size measurements.

‘Kratos’ and ‘Orange Sunrise’ were included in this study as grower standards for the 30-40 count bin size. A total of 15 entries were evaluated in a randomized complete block design with four replications. Two replications were planted at the Edenton location, one in Newsoms, and one in Virginia Beach. Each plot measured 20 feet long with 5 plants spaced 4 feet apart in-row and 6 feet apart between-row. The Edenton plots were planted on June 6, 2019, the Newsoms plot on June 24, and the Virginia Beach plot on July 2. Each plot was evaluated at 1 and 2 weeks after planting to ensure a full stand of five plants per plot. Pumpkins were harvested one time at each site, starting on August 27, 2019 (81 days after planting (DAP)) in Edenton, followed by September 17 (85 DAP) in Newsoms and September 23 (83 DAP) in Virginia Beach. Yield per acre was calculated by extrapolating total yield from the 120 ft2 area of each plot. Five representative fruit from each plot were measured to find the average weight, length and width of each cultigen. Pumpkin color, shape and suturing, as well as handle length, thickness and attachment were rated subjectively for each plot. For a detailed description of how each quality parameter was measured, see Table 2 footnotes.

Yield reductions may have occurred due to virus infection at two of the field sites and lack of timely rainfall at one of the non-irrigated sites. Yields above 16 tons per acre were obtained with Bayhorse Gold, Kratos, Orange Sunrise, and RPX 6208 (Table 1). Cultigens producing the highest fruit numbers, above 2,500 fruit per acre were Carbonado Gold, Kratos, Orange Sunrise, and Skidoo Gold. Skidoo Gold produced nearly 1000 more fruit per acre than any of the other entries. Most pumpkin fruit were smaller than advertised size in the catalog or according to seed company representatives, and this was likely due to various stresses (heat, moisture, and virus disease) at some of the study locations. Only two cultigens achieved an average size of greater than 15 pounds: Bayhorse Gold and SPU 3269. These data may suggest that under heat and/or disease stress conditions, a large sized fruit may still be obtained. Some of the smaller size pumpkin cultivar entries in this study(<10 lbs) were Early Prince, Gumdrop, and Skidoo Gold.

Fruit shapes were mostly round with the exception of Jason and RPX 6208 which were the tallest two cultigens (Table 2). All cultigens evaluated were orange in color, however Orange Sunrise was notably a brighter orange, while Gumdrop and Thor were more of a burnt orange. Cultigens with superior handle quality ratings (thickness, length and attachment) were Gumdrop, Kratos, Orange Sunrise and SPU3269.

View images of 15 varieties of pumpkins in the PDF booklet.