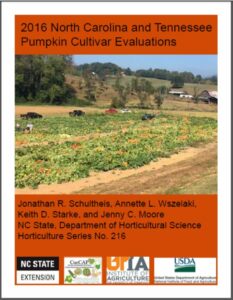 View or print a pdf version of this report.

We gratefully acknowledge the assistance of Kaleb Rathbone (Superintendent), John Eric Freeman (Horticultural Crops Supervisor) and other supporting personnel at the Mountain Research Station, Waynesville, NC, for their help in establishing, maintaining, and harvesting the pumpkin cultivar evaluation trial. Additionally, we would like to thank the University of Tennessee and North Carolina State University student workers for assisting with various aspects of the trial and the Tuscola High School agriculture students for their help with harvest.

We want to acknowledge the following seed companies for their cooperation and support: Abbott & Cobb, Inc.; DP Seed; Enza Zaden USA; HM Clause Seed Company; Johnny’s Selected Seeds; Rupp Seeds, Inc.; and Sakata Seed Company. We also want to acknowledge Joy Smith for conducting the statistical analysis on the data collected in this trial. Finally, we want to acknowledge, support for this study was provided by the US Department of Agriculture, National Institute of Food and Agriculture, for the CucCAP Specialty Crop Research Initiative grant under award number 2015-51181-24285.

Disclaimer: This publication presents data from the cultivar evaluation trial conducted during 2016. Information contained in this report is believed to be reliable but should not be relied upon as a sole source of information. Limited accompanying detail is included but excludes some pertinent information, which may aid interpretation. View the pdf version of the 2016 pumpkin cultivar evaluations.

In 2016, the USDA- National Agricultural Statistics Service reported that planted acres of pumpkin for North Carolina and Tennessee was 3,800 and 1,900 acres, respectively. The economic value of the pumpkin crop in North Carolina was reported to be more than 15 million dollars in 2016. Although the crop carries a significant value to producers in both states the total planted acres is still modest when compared to other commodities grown within each state. In the western part of North Carolina and in pockets of Tennessee, pumpkin production is extensive
due to the favorable climate and soils of the region. Collaborative pumpkin cultivar evaluation trials have been conducted by North Carolina State University and the University of Tennessee for about a decade. The advantage of growing pumpkin in areas of higher elevation is the cooler growing conditions where growers seem to experience less disease pressure, a point that Travis Birdsell, North Carolina Cooperative Extension Agent, highlighted in a CALS news story. According to the USDA Economic research service, consumer demand for specialty varieties has been increasing in recent years. The pumpkin cultivars included in this trial were mainly evaluated for yield. However, each cultivar was also rated for shape, color, suturing, vine habit, handle characteristics, and fruit size measurements. The fruit obtained from each replicated cultivar are also identified in a photograph. Several other cultivars were also included in the trial as observation plots (non-replicated) and most of these cultivars are identified in a photograph where available. 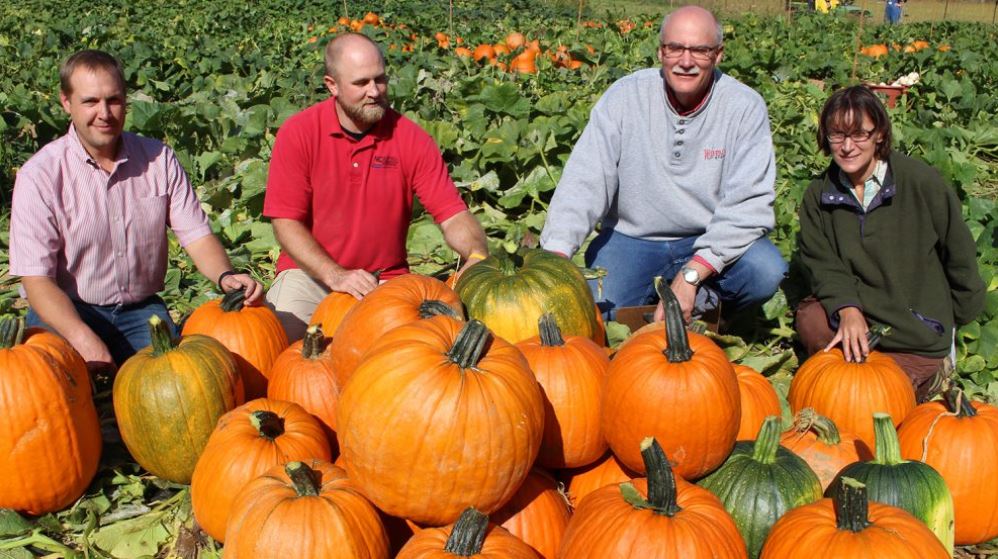 This trial was conducted at the Mountain Research Station in Waynesville, NC, and was a collaboration between North Carolina State University and the University of Tennessee. Seeds were planted on 21 June 2016. A total of 56 cultivars were evaluated, with 18 cultivars being un-replicated and for observational purposes only. The remaining 25 cultivars were evaluated in a randomized complete block (RCB) trial with 3 replications. Each plot measured 20 feet long with 6 plants spaced 3 feet apart (in-row) and row spacing was 10 ft (between-row).

Insecticides were only applied when needed and were applied at labeled rates for pumpkin production in North Carolina. The fungicide program implemented included the following products which were alternated to reduce potential for development of disease resistance: Actiguard, Cabrio, Previcur Flex, Presidio, Pristine, Procure, Radiant, Ranman, Quadris and Quintec. These products are registered for use in this crop and were applied according to labeled rates that can be referenced in the North Carolina Agriculture Chemical Manual. Fungicides were applied every 7 to 14 days throughout the growing season beginning 8 July 2016 and repeated on the following dates: 15 and 29 July; 5, 12 and 26 September; 8 and 16 August 2016. Herbicides, Dual (1pt/ac) and Command (1pt/ac), were sprayed for weed control on 21 June 2016. Pumpkins were harvested on 6 October (107 days after planting). Yield per acre was calculated by extrapolating total yield from the 200 ft2 area of each plot. Five representative fruit from each plot were measured to find the average length and width of each cultivar. Pumpkin color, shape, and suturing; and handle length, thickness and attachment were rated subjectively for each plot.

Pumpkin entries are discussed by size class and are organized in tables in alphabetical order. Results mentioned in the paragraphs below only correspond to the replicated cultivars.

Four cultivars were evaluated in the ‘small’ size class (5.1 – 10.0 lbs). Fruit of these entries are all orange. Fruit size averages between 5.1 to 6.7 lbs with Field Trip being the smallest, followed by Early Abundance. ACR 1428 and Darling produced fruit with an average weight of 6.7 lbs (Table 1). These entries ranged between 10,003 (Early Abundance) and 15,165 (Darling) fruit number per acre. Field Trip ranked second in fruit per acre at 11, 293 followed by ACR 1428 that produced 10,567 fruit per acre. Darling had the highest total fruit weight and yield of all of the entries in the ‘small’ size category (Table 1). Fruit shapes range from flat to round (Field Trip) to Darling that is slightly taller and less round.

Eleven cultivars were evaluated in the ‘medium’ size class (10.1-25.0 lbs). Average fruit size in this category ranged between 13.9 to 24.1 lbs per fruit (Table 1). Eagle City Gold produced the highest fruit yield and fruit number in this size category. Fruit yields ranged from 40.6 tons/acre (ACR 7599) to 80.8 tons/acre (Ares). Ares produced the least fruit number per acre (4,840) and Eagle City Gold produced the greatest number of fruit per acre at 9,196 (Table 1). All fruit in this size category are orange with the exception of Blue Doll and Indian Doll (Figure 1). Fruit shapes range from slightly flat to round (Blue Doll and Indian Doll) to Ares, a taller pumpkin (Table 2).

Six varieties were evaluated in the ‘large’ size class (≥25.1 lbs). Average Fruit Size in this category ranged from 26.4 to 33.1 lbs (Table 1). Early King produced the highest fruit weight per acre (88 tons/ac), while Aladdin had the lowest total fruit weight per acre (62.0 tons per acre). Early King also produced that greatest number of fruit per acre, whereas, early Giant produced the least amount of fruit per acre (Table 1). Fruit shapes were mostly round in this size class, with the exception of Early King, which produced a slightly larger and taller pumpkin (Table 2).

Figure 1. Pumpkin photographs start on page 6 of the pdf booklet.